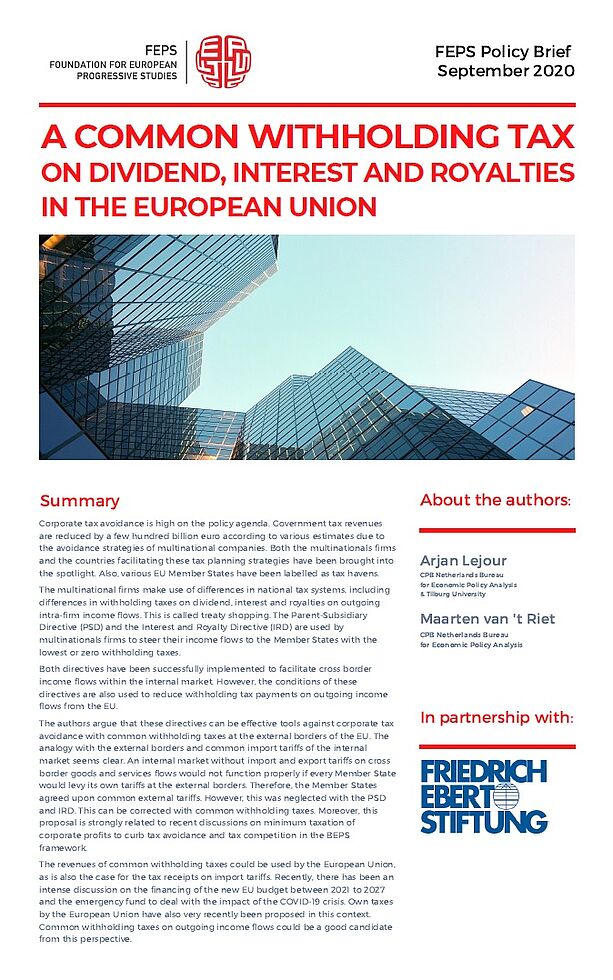 Corporate  tax avoidance is  high  on  the  policy agenda.   According   to   various   estimates, the avoidance strategies of multinational companies could reduce government revenues by a few hundred billion euro. Although these strategies  are  legal,  many multinationals  are accused of acting unethical. These firms exploit the   differences in national tax systems to reduce or even to avoid tax payments. Countries facilitating these tax planning strategies have also been brought into the spotlight.

The  European Commission  took  various  initiatives  to  curb  tax avoidance. One was the revival of the common consolidated corporate tax base for multinational firms,   originally proposed in 2011.

In this joint paper with FEPS, the authors Arjan Lejour and Maarten van ‘t Riet discuss to levy a common withholding  tax on  outgoing dividend, interest and royalty flows at the common border of the EU. They argue that the Parent-Subsidiary Directive (PSD) and the Interest and Royalty Directive(IRD) can only be  effectiveagainst tax avoidance with common withholding taxes at the external borders of the EU.

Additionally, the revenues of common withholding taxes could be used by the European Union for the financing of the new EU budget between 2021 to 2027, in particular for the emergency funds to deal with the impact of the COVID-19crisis.