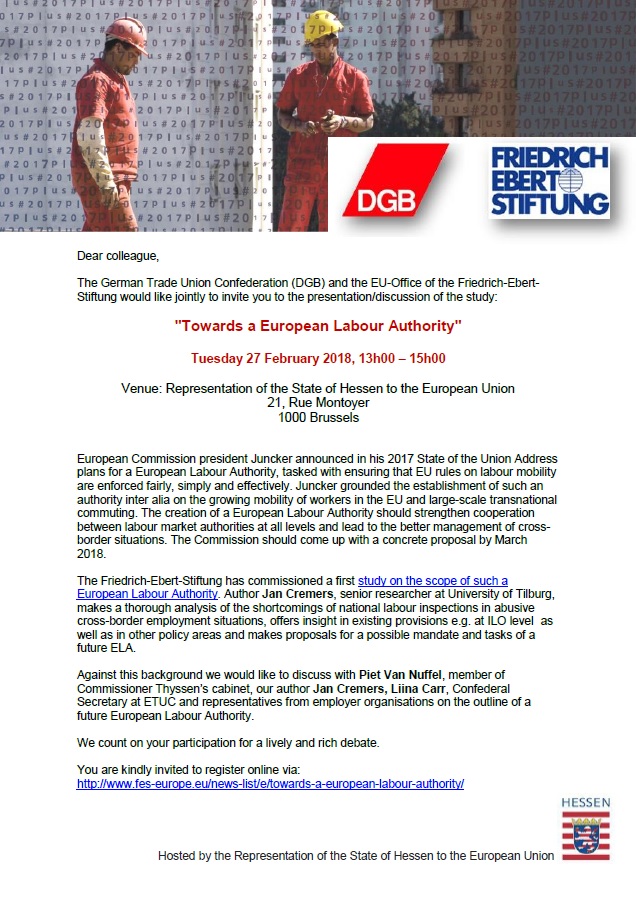 European Commission president Juncker announced in his 2017 State of the Union Address plans for a European Labour Authority, tasked with ensuring that EU rules on labour mobility are enforced fairly, simply and effectively. Juncker grounded the establishment of such an authority inter alia on the growing mobility of workers in the EU and large-scale transnational commuting. The creation of a European Labour Authority should strengthen cooperation between labour market authorities at all levels and lead to the better management of cross-border situations. The Commission should come up with a concrete proposal by March 2018.

The Friedrich-Ebert-Stiftung has commissioned a first study on the scope of such a European Labour Authority. Author Jan Cremers, senior researcher at University of Tilburg, makes a thorough analysis of the shortcomings of national labour inspections in abusive cross-border employment situations, offers insight in existing provisions e.g. at ILO level  as well as in other policy areas and makes proposals for a possible mandate and tasks of a future ELA.

Against this background we would like to discuss with Piet Van Nuffel, member of Commissioner Thyssen’s cabinet, our author Jan Cremers, Liina Carr, Confederal Secretary at ETUC and and Maxime Cerutti, Director for Social Affairs at Business Europe, on the outline of a future European Labour Authority.

Hosted by the Representation of the State of Hessen to the European Union.