How do Ukraine and Russia perceive the EU's role in the war in Ukraine? What are the consequences of the war for the EU? And what is the Union's role? These questions we adressed in our briefing with the FES representatives from Moscow and Kiev in March. 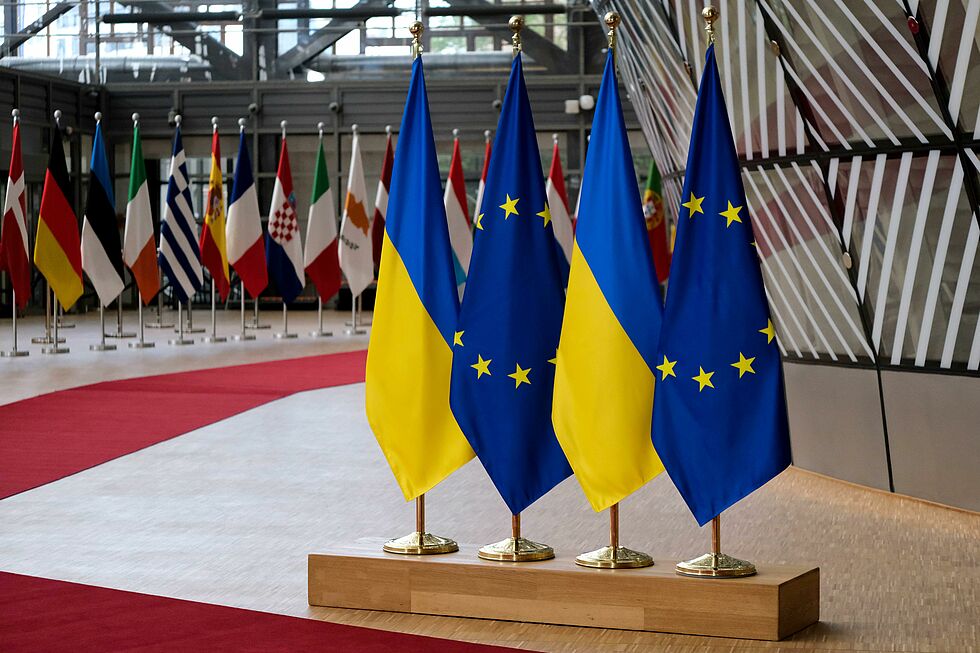 In the last weeks, events in the war in Ukraine have been unfolding at a rapid pace. Many European heads of state as well as Ursula von der Leyen and Joseph Borrell have now visited Ukraine. In addition, the EU has approved further military aid from the European Peace Facility. While the war is now shifting to eastern Ukraine, the FES office in Moscow has been closed and forced to shut down.

End of March, the FES EU Office organized an event with the heads of the offices of Friedrich-Ebert-Stiftung in Kyiv and Moscow, Marcel Röthig and Peer Teschendorf. While Marcel Röthig is currently following the situation and working from Germany, Peer Teschendorf was still in Moscow at the time and continued his work in the country. Both FES representatives gave their assessment of the current situation and looked in particular at the role of the EU in the ongoing war between Russia and Ukraine and its perception on both sides. The event was moderated by journalist Teri Schultz.

A perspective from Moscow

Peer Teschendorf described the Russian perspective on the war as mostly focused on NATO and the US, less on the EU. The Russian desire to control Ukrainian society is the main objective of the war. Within the Russian population he sees only partial support for the war, while most people would distance themselves from politics and news. In this context the EU has the potential to wield influence by using the leverage of energy supply, as Russia does not expect the EU to impose far-reaching sanctions in this area. Teschendorf pointed out the danger of the Russian propaganda machinery, as the Russian government is building up a dangerous narrative which is now also gaining influence in the West. Ukraine and NATO are portrayed as the aggressors and the use of bio-weapons by Ukraine against Russian soldiers is reported. It can be assumed that this narrative is being deliberately constructed in order to justify a further level of military escalation by Russia. According to Teschendorf, the EU institutions, including the European Peace Facility, are not really taken seriously by the Russian side; Russian leaders see the EU more as a vassal of the USA.

A perspective from Kiev

Marcel Röthig sees the Russian offence weakened since the beginning of the war. In his opinion, Russia might face a strategic defeat, not being able to secure the set military objectives of the attack. Additionally, Ukraine is currently achieving considerable military successes. A potential outcome of the war might be the scenario of Ukraine's neutrality in the style of 'Finlandization'. The prospect of accession to the EU will be an important incentive for the reconstruction after the war, even though Ukraine might struggle to meet the Copenhagen criteria in the near future, also because of the large-scale destruction. It is clear that Ukraine would like to see further assistance from the EU, but at the same time is aware that the EU has never done more for a non-member country. Röthig particularly emphasized the role of the European Peace Facility, which provided considerable support for Ukraine's defense.

A full Russian victory seems unlikely at the moment. There are some hopes attached to the Russian diaspora and to the fact that many Russian intellectuals are now trying to have some influence from exile. Several scenarios seem possible for further development: a long-term occupation of Ukraine which could lead to an Afghanistan-like guerilla situation with heavy destruction; Russia could focus on the Eastern parts, with a very instable agreement and could fuel the conflict whenever politically

opportune. Ukraine could ratify the European Charta for minor languages, that could satisfy Russia’s public demand of protecting the Russian minority, which might offer an exit point. Reconciliation between both countries is currently not an option. The difference between both nations are severe and connections between civil societies were very weak even before the war, there is not much that could be revived or used as a starting point to rebuilt.

Marcel Röthig concluded with the hope to go back to Kyiv and to even intensify the work of the FES which will be more important than ever.